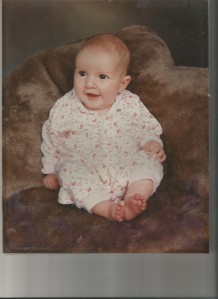 It was a cold December night, the delivery room’s large bowed window glistened with frost.

After a normal delivery, Isabel arrived, happy, healthy, and, just under 8 pounds.

All was well with the world.

Her hair was golden, soft and downy.

Her eyes,  huge and black.

She breast feed quickly, and then  lay contented on my shoulder.

Her only prolonged crying, after her three months injections, her temperature was high.

She was cared for by Janice, a child minder, who adored her, whilst I worked.

Walked at 18 months, did peg puzzles faster from a picture down position, and adored the Teletubies, passed all milestones, but refused to go near a potty.

Whilst shopping, she would run away, be found in Woolworths ,happily eating a chocolate orange, so we used a wrist reign until she was 4, and  she was addicted to her dummy.

Recently, I discovered videos taken of Issy at 4, shouting,  ‘ Shut up you noisy bugger’, at her sister crying in her pram; and watering  flowers in the garden, with what she called a tea pot.

I asked her, did she like Harry, her sisters pet name, she remained silent, but her ‘reluctance to say ‘No’ expression, said it all, so I persisted,

‘Is Harry your friend? She looked away, and then turned to me, with the cutest of smiles, and stared intently at me, with the words,

Back then, never could I have realised, how lucky I was to have captured that moment for ever.

It was to be, one, if not the only, close mother and daughter conversation.

We went on holidays to Club Med.

Issy spent her time playing with the French children and performing shows. 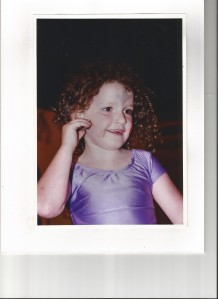 Isabel was to start our local parish primary school.

We had high hopes; it was top of the Sheffield league table.

I had described her as lively, and bright, but Isabel still refused to use a potty for poo, and our road through the bewildering world of experts began.

Her University nursery, mysteriously talked of, ‘these types of children’, a child psychologist diagnosed a specific language disorder.

Issy spent her time continually watching, and describing Bob the builder videos, ‘Wendy’s got her hair up, and make up on’, she would shout, and then detail the next scene, even when out of the room.

At 5, she read, age 7 ‘Peter and Jane key word’ books for hours out loud to herself, faster and faster instantly memorising a word.

A week before she was to start school, Isabel sat a battery of tests, at the Sheffield’s Children’s hospital.

The assessors robotic question, ’What is wrong with the picture?’, remaining unchanged, despite Isabel’s obvious confusion.

After several pictures, I felt  I had to  rephrase it, to, ‘What is missing from?’, wondering at the competency of the expert, and the validity of the assessment.

When I went back alone for the results, the same apathetic, robotic assessor, told me Isabel did not have a general learning disability, as her IQ was above average, but was on the autistic spectrum.

I didn’t have a clue what that meant, nor, where on this mysterious spectrum, she might be.

I had previously looked up the definition of autism, but as a severe development disorder, that manifests itself before 2,  concluded,  it could not be the problem.

But the lady said no more, and handed me an information folder compiled by the National Autistic Society.  We had been processed, her job was done.

Politely, I attempted to elicit some clarification, wittering, ‘I’m pleased Isabel hasn’t general learning disabilities, as that means she might get some GCSEs’,  she said that was ‘unlikely’.  I persisted, asking if she might ever marry, again, ‘unlikely’.

Her silence gave me no option, but to leave with my folder, containing a National Autistic Society’s application form, together with standing order, and a glossy leaflet describing three vague, and meaningless impairments of this, apparently, devastating disorder.

And could apply to anyone,- difficulties with communication, socialising and forming relationships, and Isabel always looked people in the eyes.

Later attempts at clarification, were patronisingly dismissed and interpreted as ‘parents in denial’.

I walked back to work numb, feeling I’d been hit by something, but didn’t know what.

Now, Isabel could not start school later that week. As she needed a SEN statement.

This took over 6 months, and forced £100 per week payment to her nursery.

And meant, after being phased in, Isabel did not started school until just before the Easter break.

Her report from nursery, shows her unhappiness with this, Isabel declaring, she  did not like nursery, after school days, and ‘I am too old’, or ‘l am too big for nursery’.

And, Isabel was expected to socially integrate, and keep up with the rest of her normal classmates.

This would have been hard and unfair for a normal 5 year old but doubly abusive for an autistic.

But such is the nonsense of ‘special needs’ education.

The school did nothing to accommodate Isabel other than allow one of their dinner ladies to assist her in class.

Arrivals, and departures were a nightmare because of the crowds.

And Issy still waited, until she was home in a nappy, before she would poo.

A fact, I was forced to point out, might account for her worsening behaviour in the afternoon, rather than her autism.

And so began a future of her behaviour, being divorced from any reason, other than her autism.

Isabel made her first, and only  friend, Rebecca.

And, together they would hold hands in the playground, and go to the park at the weekends, until her mother, without explanation, decided the relationship must end, and teachers were told to separate them.

A sad day for Isabel, and , as always, her reaction was blamed on her autism.

Isabel had become a mysterious disorder.

Isabel would be invited to parties, and behaved well, but if someone was hit, or objects broken, parents were all to ready to blame her, even though she was not the culprit.

Isabel was the perfect scapegoat.

At 7, Isabel could write anything, if  spelt  phonetically and wrote little notes to her class mates, thanking them for being nice to her, or playing with her.

The children were very good to her, but sadly not the parents, the vocal minority, resented a special needs child, and reminded me, in a very nice way,’ this is not a special needs school’.

Towards the end of year 2, the school decided Isabel was, (understandably) monopolising her classroom assistant, and the assistant was moved to another class.

Isabel took this as a rejection, and must have attacked her at dinner time, as the assistant had slapped her.

The facts and reasons, for the incident were vague and covered up, as necessitated by our litigious, self preservatory culture.

But within two weeks, a meeting was convened, and it was decided, her school was not now, appropriate for her needs , despite a meeting, a month earlier, agreeing it was.

Her SEN statement for year 3  was changed, to fund a mixed disability special needs school placement.

Still today I regret not fighting the authorities to stop the move, but we trusted them.

As it was that move that  commenced Isabel’s educational decline. And with it her behavioural deterioration, into what might be termed ‘severe’ autism,

She went from SATs to P Scales and regressed, despite ever more money, being ploughed into her ‘education’.

Such is the scandal of our ‘special needs’, expensive, ‘write off’ provision.

She refused to go some days, and social services got involved, their answer to this, and to provide our first overnight respite, was to take her to the respite facility after school, without telling Isabel.

This inept handling,  proved a disaster, and  Isabel returned home, soiled, bruised, and in a terrible state, but we could not find out what had happened, and she now totally refused to go in the school bus, and we had to take her by taxi , restraining her in the back.

The Local Authority had again let Isabel down badly, but as they, nor her school could  be blamed, we as her parents, not only had to pick up the pieces, but also take the blame, along of course, with the ever present excuse of her autism.

Isabel at her parish primary age 6.