As we have nearly 4,000 AMHPs enforcing MHA sections, both publically and in a person’s home, we are being harvested for private mental profit without help or rights .

And our police are the main back up force

Here is the latest post and comments from the masked AMHP facebook, remember there is a  service for those depressed and suicidal and referral system from friends to Samaritans. The harvested are worth 13,000 a week of NHS money so are sought  from every source Private NHS Foundation Trusts like Sheffield Health and Social Care are paid public NHS money for suicide prevention teams and are run for profit.

‘top marks for being discreet to the amph who just came , before i could get to the door he was yelling my name , his name and that he was a social worker , i had to answer the door and then insist it was shut again so i could secure the pet i hadnt had even a second to put away , he was a pretty reasonable guy but that was a bit excessive – is that standard procedure ?

A comment TO ABOVE; If I’m there for a MHAA I shout v loudly to explain that we’re executing the warrant, if there has been no response to initial civilised knocks and doorbell rings. I’m already assembled on a doorstep with a mighty throng of doctors, police, locksmith, pet looker afterer etc so discretion has already flown out the window in favour of ensuring the person is safe. I want to prevent an unnecessary, potentially distressing legal break in if at all possible in favour of getting the person to answer the door.

aNOTHER CMMENT  I believe it is bullying to shout, especially when you are revealing private medical information in public. theres nothing shouting will achieve that knocking and putting note through door wont. And if theres a warrant for goodness sake keep the mob in their cars until you absolutely have to let them out to do their job. Sometimes it seems to me that some amhps enjoy the drama a bit tooo much without keeping the impact on the patient as the priority.

AND ,
It appears the police are being used as the only mental health emergency help for those suffering from mental issues, despite the extra millions the government have ploughed into NHS Health and Social Care Trusts, many like Sheffield Health and Social Care are now private companies making profit out of our NHS.

It has been reported that NHS trusts, do not have crisis teams and are merely contacting the police when a person is in mental health crisis.

The police, together with an independent, employed and trained by State, mental health act Practioner are then assessing that person under detainment by s117 MHA in a place of safety, and generally referring them to private for profit NHS mental hospitals, anywhere that has a bed, for which up to £13,000 a week is being paid.

Here is a report of one such NHS patient in crisis of what happened to them
I particularly enjoyed hearing a recording recently of a call to a CrisisTeam by a patient who chose to record their own call ‘for training and monitoring purposes’ and it involved a person asking for someone to talk to as they recognised their own relapse and having tried various distraction techniques of their own, before ringing. To say my gast was entirely flabbered as the nurse sought to quickly get rid of the call and ring 999 is to dramatically understate things: there was just NOTHING there to justify ringing the police. A person wanted to talk: it was bluntly (and rudely) refused and the actual words used by the patient seemingly ignored, the phone went down and the local police received a 999 call.

Is this now the mental support our NHS is offering and how can this help and improve mental health ? 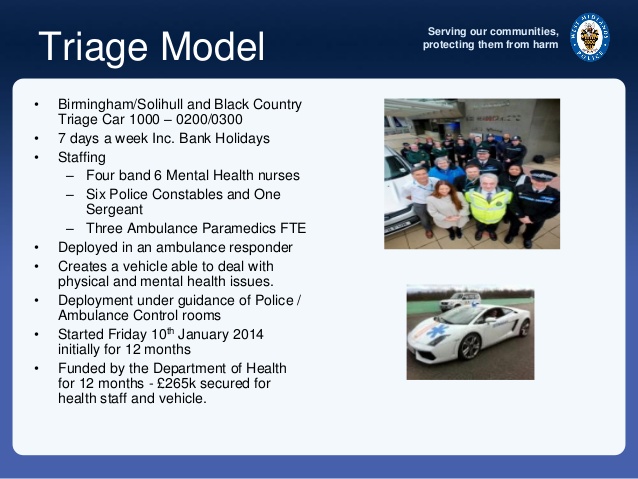 An English man’s home is no longer his castle from Monday 11th December.

As police can enter anyone’s home, be it tent or shed, and search for and remove an occupier to ‘a place of safety’ and provide any enforced ‘treatment’, if they suspect he is ‘ suffering from a mental disorder.

And he can then be detained interminably under the MHA or MCA .

This may seem beyond belief but it is terrifyingly true.

It gives the  Nanny State and private mental health services the ultimate power.

The Mental Health Act s135 allows such an ultimate, disproportionate interference with a person’s human rights- the removal of his legal competence ,

‘with a warrant’ obtained form a magistrate without notice,  if there