It is 7 years since Winterbourne aired, the head of the Care Quality Commission resigned, and Mencap published a report warning similar abuse could be going on elsewhere calling for the closure of large institutions far away from patients’ families.

And the Government set a national ambition to eliminate ‘inappropriate’ out of area placements for adults ( not children? ) by 2020-21

So what has happened ?

The British Medical Association has been forced to obtain out of area placement figures via FOIA.

And the cost of such placements has risen from £108 million to £159 million.

One patient from Somerset was sent over 587 miles to the Scottish Highlands, another two from Oxford over 532 miles to Inverness and Grampian, a Dorset patient was sent 323 miles to Darlington. and another sent from Leeds to Plymouth.

The affect of such journeys on mentally vulnerable people and being left captive with strangers unable to see anyone familiar can only be imagined, but could only worsen their mental health.

When David Knight 29, killed himself after being sent 150 miles from home, the Coroner noted the out of area placement ‘very likely’ had a bearing on his death.

Why is this happening ?

We are told it is a shortage of beds, but is it just factory farmingnywhere for profit, commercial awareness and ‘care pathways’ ?

Before our government ‘transformed’ mental health, people were inpatients for as brief a time as possible, as a last resort in a ward in their local hospital costing far less.

Now they are whisked off by police/ foundation trusts to local acute holding bays, and then on to anywhere no matter how far, to anyone available to receive their £13,000 a week NHS bounty.

If commercially enforced outsourcing of our most vulnerable all over the country to any available ‘facility’ is allowed, what does this say about their treatment ?

Yet at the time some of their hospitals had been rated requiring improvement and their CAMHS services are worsening.

Here is the latest damning Buzzfeed investigation into Cygnet  but there is no UK media coverage.

We have a core of autistic/learning disabled people holed up and newly harvested to mental hospitals.

Any meltdown at home or in public, can and does result in a swift removal by the police under s136 MHA to a local holding bay and then onto wherever hospital is available for years.

According to an HSCIC census, there were 3,230 hospital in-patients with learning disabilities, autism and/ or challenging behaviour on 30 September 2014, with an average length of stay of 547 days and living an average 34.4km from home.

Despite the government providing local LAs with 136 million to repatriate these out of area ‘patients’ to ‘community living’ near their home, today the figure remains at just under 3000.

And we do not know the number of new admissions, but do know Cygnet have built new hospitals for the autistic and learning disabled .

And UHS/Cygnet own most of the local ‘community living’ where the LD/ASD are institutionalised for life.

The first big player in ‘specialised’ mental hospitals was St Andrew’s Healthcare, Northampton, formally The Northampton General Asylum, funded 90% by NHS, and given £45 million to build a 110 bed CAMHS pathway residential unit for those with behavioural issues, autism and learning disabilities .

It now has a 900 bed capacity and is marketed as a national ‘specialist’ service for practically everything -autism, learning disability , dementia, bipolar, anxiety, brain injury, psychosis from anywhere Scotland, Wales, Northern and Southern Ireland .

All this is despite unexplained deaths and criticism

The latest being a Dispatches documentary.

Yet St Andrews was awarded mental health hospital of 2016.

Paul Lelliott, the CQC’s deputy chief inspector of hospitals said
‘Away from the patient’s home, meaning people are isolated from their friends and families. In the 21st century, a hospital should never be considered ‘home’ for people with a mental health condition’

More than 50 years after the movement to close asylums and large institutions, we were concerned to find examples of outdated and sometimes institutionalised care,”

“We are particularly concerned about the high number of people in ‘locked rehabilitation wards’.

Yet this CQC report says nothing about the effectiveness of treatment, and outcomes for patients, merely going on to list waiting times to harvest for this ever greedy industry and a shortage of nurses.

Promoting the need to throw even more money at private mental to harvest and build new asylums.

Lelliott also added:
“We were surprised at just how many of these wards there were and how many were locked.

We also had some concerns about the fact that they weren’t that discharge oriented, they weren’t actively enabling people to return back to their home environments.”

Stays in such wards should be

“a step on the road back to a more independent life in the person’s home community”, and not a long-term treatment option’.

It appears private NHS mental lock patients in, more often than NHS trusts, allowing the maximum £13,000 a week to be claimed, fueling suspicions they hold on to some patients longer than necessary in order to maximise profits.

The government has promised 1.3billion to ‘redesign’ mental health in waves .

The total budget of the programme across both waves is around 640 million, representing approximately 35 per cent of the Specialised Commissioning mental health budget (350 million for wave one).

Nearly a fifth of the total NHS budget is spent on mental, whilst 3.83 million non mental patients wait for NHS treatment and just 7% is spent on GPs.

It would appear, our Mental Health Taskforce’s real purpose is not to improve the lives of the behaviourally disabled and socially distressed, but to make as much profit from them as possible from our public money. 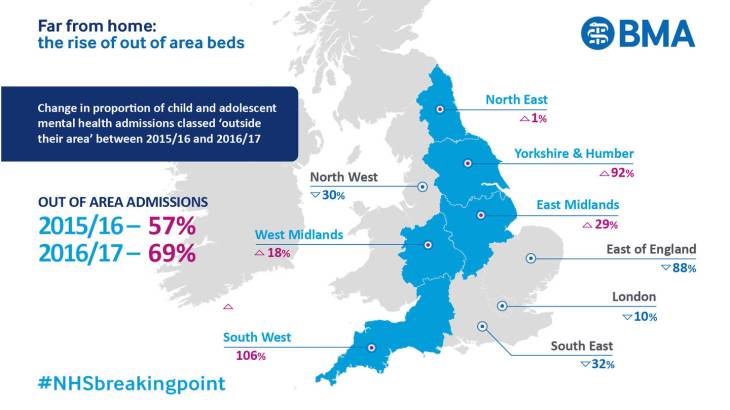