In 2011 the CQC made a routine announced visit to an Alpha psychiatric hospital in Sheffield and spoke to staff and patients on all three wards.

And found it failed to comply with seven of the government’s standards of quality and safety.

By law providers must meet all standards, but there is no sanction at best, and very rarely will a hospital be put into special measures.

And as confidential commercial contracts, we have no details of the lengths and contractual terms of NHS contracts.

Alpha Hospitals (NW) Limited were given 14 days to produce plans to show how it intended to achieve compliance.

After UHS took over Cygnet bought all its three of Alpha’s Hospitals in Woking, Bury and Sheffield for 95 million.

But now 6 years on and billions of public NHS money later, ‘treatment’ appears even worse in the former Alpha Sheffield hospital.

So bad in fact, a Labour MP Louise Haigh wrote two months ago to the Health Secretary demanding an urgent meeting about care in Cygnet Sheffield.

The CQC had rated the hospital “inadequate” on safety.

Cygnet’s response was health and wellbeing of patients was its “absolute priority”.

The CQC inspected Sheffield 3 times in just 13 months, twice due to serious incidents.

The most recent inspection in July focused on the Haven ward, and identified a number of issues which caused the CQC to have “significant concern for the health and wellbeing of patients”.

Haigh mentioned to the House of Commons that a young woman was found by the inspectors to have MRSA with open wounds on a ward.

Haigh has since written to NHS England, Jeremy Hunt and Cygnet Healthcare over a “lack of learning” from incidents at the hospital

Comments of patients in Sheffield on the net are damning .

SL -a year ago

A lot of gossip with staff everyone knows everything about everyone. Not as professional as I would’ve hoped when it came to legal matters. No support given when it was needed.
Bullying from some staff members.
Doesn’t get cleaned as thoroughly as I would’ve thought with it being a hospital. Blood can remain on walls for months.
Over all pretty disappointed with the experience.

Despite all this in June, Cygnet  announced NHS England had confirmed Cygnet Health Care, as a partner in 3 out of the 11 new programmes commissioned for mental health services.

This was the second commission following a wave including Cygnet announced last year.

The 11 new care model programmes will be given a £300m commissioning budget.

‘By creating new partnerships ( presumably with Health and Social Care Trusts) to explore new opportunities to improve care pathways for our service users.’

Cygnet continues to increase its empire, building new hospitals the latest in Coventry, a 56 bed specialist mental health service is to be opened by Debra K. Osteen, President of the Behavioural Health Division of UHS admissions in March 2017

Cygnet has its own events company and hosts work shops, conferences, award ceremonies, and training on all aspects of behavoural health, the new mental.

It has created its own world from awareness , detection, diagnoses and treatment.

It has its own annual National Service User Awards.
https://www.cygnethealth.co.uk/events-archive/

It intends to control all aspects of behaviour ‘disorders’.

How they are diagnosed , treated, even socially perceived.

But treatments appear similar- the most profitable, detainment and medication.
And all ages are harvested children via CAMHS and adults via AMHS

‘Cygnet Health Care has been providing a national network of high quality specialist mental health services for almost 30 years.
With a true focus on outcomes those who use or commission our services can be assured we are an experienced, service-user focused, provider of quality treatment, care and rehabilitation’.
https://www.cygnethealth.co.uk/

But what are the comments and experiences of its service users ?

My relative went in as a voluntary patient in March.

By the end of the week they had them on a section 3 was giving them olanzapine injections. I told them the drug had been used in the past and didn’t suit.
Relative became really unwell was not taken care of sent to a god awful place came back months later.
I went to visit and they had had a meeting and put a safeguarding thing in place on me.
I am a woman in a wheelchair who has complained constantly about how my relative had been treated. This place could not organize a piss up in a brewery oh hang on the place is one big boozefest

Beckton
Extremely poor level of patient care. Very unprofessional and incompetent staff including the managers. Vulnerable people with learning disabilities and those who self harm require a safe, therapeutic and positive setting to recover and receive treatment, and this is not the place!

Heather Maclatcy
A month ago
Cygnet I wouldn’t send anyone to this place is not compliant in my view with the mental health act or the code of practice ie restrictive practices form the hospital management down to day to day staffing and some of the practices as seen on hansa ward leaves a lot to be desired Like how some of the staff deal with patients when they are in distress ie restraint isn’t practices are like how you would treat prisoners in prison bending joints in the wrong way which is not at all acceptable, because it could lead people lifelong injury plenty of other ways in my opinion how to get someone to comply with instructions non-pain compliant techniques, lucky was not a issue with me I felt bad for other patients
And as well to get medical care at Cygnet leaves a lot to be desired I had to go Private for dental treatment because The RC would not grant leave to see specialist dentist is medical leave and these guys stretch the truth to the max like in mental health tribunals they lie through their teeth
You are CCG do not send your patients to this hospital under any circumstances
If you got a loved one in this hospital exercise your rights as nearest relative to get them discharge under the mental health act

And what  do Cygnet workers think ?

And here are stories of those trapped in hospitals.

And two of the many who have died in Cygnet ‘care’.

Patients are being made much worse this is not ‘treatment’ as required by law under MHA.

We have a purported ‘cash strapped’ NHS, which is siphoning off public money to allow private US multi nationals to make as Cygnet has £6.3 million profit a year and pay nearly half a million salary to their head.

Worse still, the NHS appears not to care about the ‘treatment’ paid for and outcomes for service users.

Calls for ending the sending of NHS patients to a particular hospital continue but despite even an MP request it appears nothing can happen as NHS England under Health and Social Care Act 14 not accountable even to Parliament .

And here are Cygnet CQC ratings. 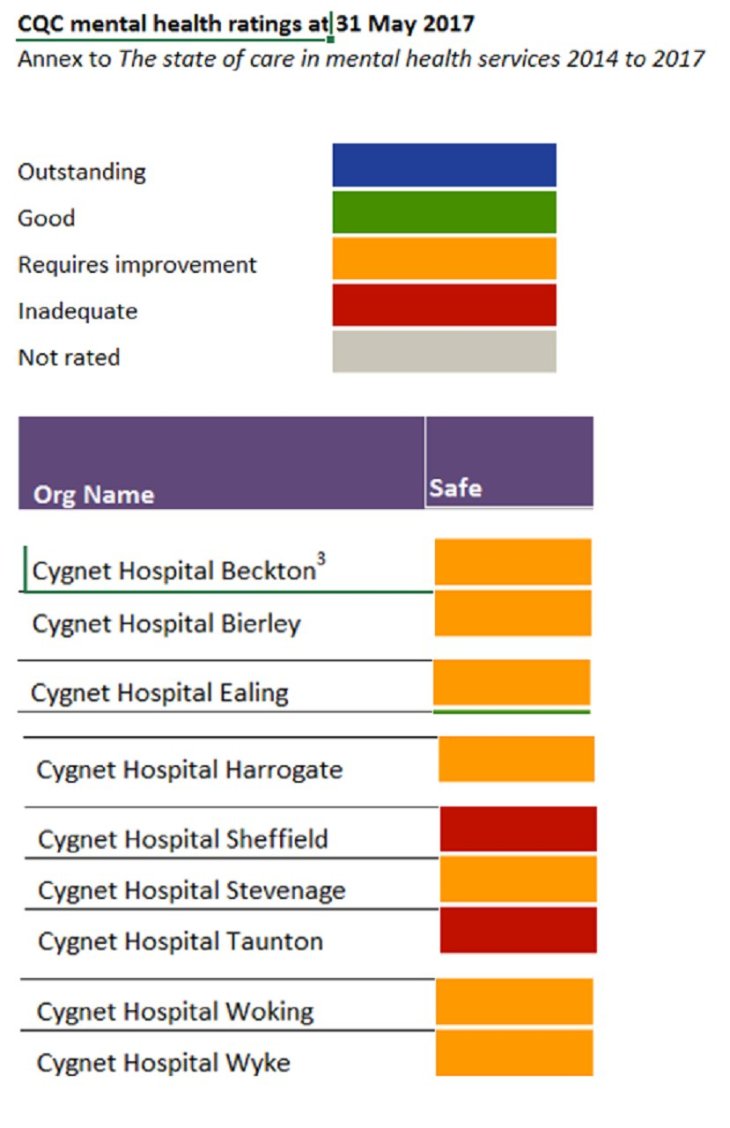 Yet as shown in its 2018 Newsletter Cygnet goes from strength to strength, it is the government’s chosen provider main provider, too big to fail, creating its own world of exemplary ‘service’.